"A thing of beauty": urucú's place among the Eastern Timbira 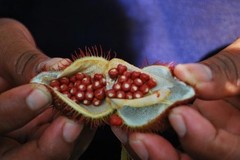 A recently-published article (Moreira et al. 2015) has suggested that urucú (or annatto; Bixa orellana), a plant whose seeds produce a widely-used coloring agent, was probably domesticated in South America. Rondônia (western Brazil), the likely birthplace of cassava, is once again a strong candidate to have given the world yet another important agricultural item. For the historical linguist, a fascinating piece of information — not mentioned in the article — strongly corroborates the antiquity of the plant in the region: a name for 'urucú' can apparently be reconstructed for Proto-Tupí (cf. Rodrigues 2010), which is supposed to have been spoken in Rondônia about 5 thousand years ago.

The importance of the plant in South American indigenous cultures cannot be overstated. And a delicious account of the high regard with which it is held is provided by Curt Nimuendajú in his monograph The Eastern Timbira, in a passage here transcribed for our reader's pleasure (and, admittedly, a little South Americanist pride).
----

Red urucú, the most common [pigment], at once attracts every visitor's notice by its omnipresence. The Indian himself and everything he owns are more or less red with urucú. Whatever they take hold of turns red, as does anyone living among them. The urucú stain on an article is not conceived as dirt, but as an embellishment. Any trace of earth on prepared food is removed by scraping and washing, yet no one dreams of attempting this with the imprint of the cook's ten digits. The Indians grow irritated if civilized people voice disparaging comments about the use of urucú; any person or article reeking with the pigment is a thing of beauty. A collection of ethnographica from any Timbira tribe is marked by the varying red, brownish-red, and yellowish-red tints of urucú. Especially when fresh the pigment emits a strong odor which civilized observers identify as "stench," while it delights the Indian's nostrils no less than the red color pleases his eyes. Naturally the odor is attached to the Timbira himself and all his belongings.

Urucú is not only beautiful, but also useful, being credited with antiseptic and prophylactic virtues.
In order to have the pigment constantly available the urucú shrub (pų; Bixa orellana) is planted beside or behind the dwelling. The red pigment, forming the thin layer of a moist mass, surrounds the seeds in their capsules. The Indians either gather fresh capsules from the shrub according to need or harvest the mature capsules, removing the seeds for storage in gourd bottles, which are plugged with stoppers. More particularly it is the young girls who always keep such bottles suspended by their beds. Men never own them since they are always painted by the other sex. After a while the pigmented mass dries on the seeds; then it is necessary to prepare the coloring matter with the oily juice of babassu seeds. The urucu seeds are poured into the hollow of the hand, the juice of the chewed babassu seeds is expectorated over them, and the mixture is rubbed between the flat palms. The pigment thus produced is removed with the finger or a little rod, either for immediate use or for storage in a little gourd bowl (pl. 14, m). These small urucú gourds, suspended from the back by a plaited cord, are the badge of the girl associates (p. 96), whose duty it is to paint the members of their festive organization. The pigment remains visible even after several baths.

The Indian himself and everything he owns are more or less red with urucú.
Another mode of preparation is derived from the Guajajára: after the washing of the seeds the fluid is condensed by boiling; roundish lumps are molded from the soapy mass; and these are wrapped in leaves or cloth. However, the older generation spurn this innovation because the urucú loses its odor in boiling. Chief Kukrãčą' objected in my presence when his niece wanted to paint him with pigment thus prepared and sent her for fresh capsules.

Urucú is not only beautiful, but also useful, being credited with antiseptic (p. 50) and prophylactic virtues. Going to a pool for my morning bath before daybreak on one occasion, I met my hąpínpey, Čątú, who was about to start on a hunting trip. (See p. 100 f.) He was carrying a gourd bowl with a handful of urucu seeds, which he mixed with water; then he drank the red liquid, declaring it would give him luck in the chase. He insisted on my taking a few drafts; eagerly overruling my objection that I had no intention of going after game, he informed me that that made no difference: urucú was good for any purpose, it was impossible to use enough of it. Whenever I obtained urucú for my collection, I was generally admonished to employ it extensively.

The Indians grow irritated if civilized people voice disparaging comments about the use of urucú; any person or article reeking with the pigment is a thing of beauty.
As a matter of fact, the effect of the red pigment on the Indian's dark skin is very agreeable, but, on a North European it is too showy. The Ponto women, however, had the contrary impression: unable to understand my wish to rid myself of my coat of urucu from time to time by washing it off with soap, they imagined that I wanted to be quickly and more effectively repainted. A man's kinswomen are blamed if he should go about unpainted for a considerable period. "So-and-so's sister," gossips will say, "does not look out a bit for her brother! Just look! He has not a particle of urucu on his body!"

Since the preparation of urucú reddens one's hands in any case, the coarser ornamentation on the body is executed with the fingers and palms, little rods being reserved for the fine red lines of the face paint. Stamps and painting-forks are never used in this connection. (p. 51-53)